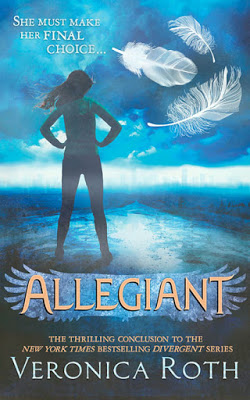 “It’s just the matter of a choice. One choice… It can transform you, destroy you or… DEFINE you…”

The faction-based society which Tris & the others came to believe is shattered and replaced by the factionless members. After showing the video of Edith prior, Tris and Tobias believed that the people will decide to explore what’s beyond the fence.  Unfortunately, things didn’t turn out as expected. The factionless leaders were no good than the factions. So once, Tris is given the chance to explore the limits, she agrees.

But what if the world you lived in was faux? Nothing but fake? What is there behind the fence which changed the lives of Tris and Tobias? Will they find a stable relationship beyond the fence or… something else is in store for their future? Read Allegiant to find out.

Allegiant! The book which got me all hyped up. After reading the book, I was pretty much…umm…let’s just say – stunned. The book was great. It was definitely better than Insurgent but had its bad moments as well.

The best thing I found in this book was that how Tris behaved. Her character switch was Awesome. She was braver than she was in Insurgent. (Her behavior in Insurgent frustrated me to no limits!)She also acquired all the qualities of the five factions – Honesty, Bravery, Intelligence, Kindness & most importantly, Sacrificial feelings. Also, the plot was good and dark. (Yeah! I actually loved the tension and stress that was building in the book.)

Though, I think, the sequence of the plot could have been faster. There were a few unnecessary scenes. The actual story started after around 150 pages. Then, there was a phase where the novel reaches the ‘nothing actually happens’ part. Then again, it picked up the pace. This on and off interest in the novel frustrated me.

The thing I hated the most was the dual perspective of both the characters. Don’t get me wrong… I love the change in POVs. It gives me a chance to make a home in the mind of the other characters as well. The only problem in this book was that both the characters were thinking similarly and so, the book became quite repetitive.

Though, the book, in all, was Superb! The plot twists and the tensed atmosphere. It shivered me till the spine. Now I came to know why this book is so popular. According to me, it deserves all the praise it has been gathering since its release.

Go ahead and read this book, if you haven’t. Though I can’t say that you won’t be disappointed, I can say that you will enjoy this read. So friends, grab some coke & a comforter. Take a deep breath & dive into this fictitious world of factions, danger, heartbreak & most importantly, bravery…