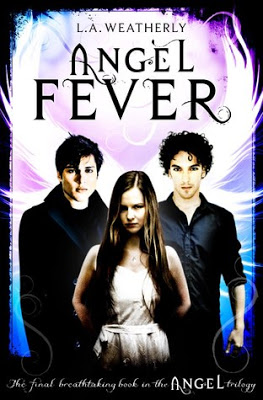 The AK’s are determined to end the existence of the angels and save the world from their tyranny! But this is easier said, than done! All of their previous attempts in demolishing the Angels have just endured failure! What is so special this time? Will they gain victory over the angels, or the angels will rule us… Forever?

This book actually ‘Threw me off the Groove’. The Heart – pounding conclusion to the Epic ‘Angel’ series! This book is too splendid to just miss! Fantástico!

I had come a long way and was definitely not ready to just let go of this series. It was a very thrilling read! Also, I started reading the series because I have always been fascinated by angels. Nowadays I just can’t get enough of ANGELS!!!

In this book, Willow is not that girl now who she used to be in the first two volumes. This is quite understood, seeing what all she went through! She is not that type of a girl whom you keep messing around with and then, go back ‘unharmed’! I really respected Willow in the book. Also, this was my ‘first’ book… Actually, the first one in which I ‘Respected’ the female protagonist. Generally, the female protagonists are all whiny, silly and problem – creating types! But Willow was the exact contrary of them!

Now, what I believe is that writing a final book in the series is a real heck of a job! You need to wrap up all the things, tie all the loose strands and at the very same time, keep things new, interesting and full of suspense so that the readers do not find a repetitive edge to the novel. This frankly, makes the book boring.

But! Boy… This book was super fascinating! There are thousands of things to be ‘discovered’ in this novel. Very teeny – tiny details which are of great importance. Also, it was no cliffhanger. All my questions were answered and no second thoughts were there in my mind regarding the climax!

I can’t name any particular emotions which arose in me during my read. I thought my crying days were over with ‘Angel Fire’. But Alas! I was wrong! LA Weatherly knows how to keep her readers glued to her books.

I was badly heartbroken after the first 180 pages or so! It felt as if, my heart has drowned into the extreme depths of the seas! It was so difficult for me to further read the book. But at the same time, I couldn’t stop reading it! Especially, after the building of the suspense. I was so immersed in the book that I was so reluctant to just put the book down for even a few minutes!

Dudes! I challenge you to just try and put down the book at that time! You won’t be able to! The tension starts building from the very first line of the novel and continues till the very last one! But when it develops apace… My God! Superb!

Finally… the crucial battle between the angels and humans has begun! The situation is ‘Either Kill or Be Killed’. The fate of the world dangles in between! Does Humanity stand a chance against the Angels? Will the love endure everything and still be alive? Will it be a happy ending? Or, Will everything be finished, all hopes burnt in the fiery hellholes of Angel’s eyes?

To find out, Read the astonishing, thrilling, full of suspense conclusion to the Angel series, “Angel Fever” This Fever Has Started Spreading!

I repeat the same thing for the third time… GO and READ the series!! You will LOVE it! Give it a TRY! It’s ABSOLUTELY WORTH It!

LA Weatherly, You are the BEST!

Uncategorized Shreya Vijay - February 28, 2021
0
It is a single place where you will get the latest and original book review directly from the reader's reading experience.