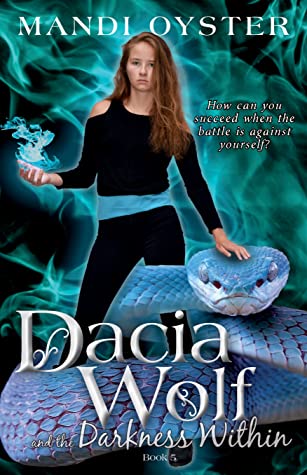 The Dacia Wolf series by Mandi Oyster is back with its fifth installment as enthralling as its predecessors. A taint has contaminated Dacia’s magic. Using it could prove to be lethal for Dacia and all those around her. However, using her magic is like second nature to Dacia. To complicate the already tangled matters, her magic wants to harm someone whom Dacia loves more than herself – Cody. How would she go about her life, worried about her safety and of those who are around her?

Mandi Oyster brings about an engaging and thrilling Fantasy series with a well-appointed world. Story-wise, I must commend Mandi for always bringing about something new for the readers. This book is a perfect blend of Fantasy and loyal bonds. I have always admired the bond between Dacia and the Dragons. It is pure and adorable. Reading about them together always brings a smile to my face.

The book, like all the others, is penned from the perspective of Dacia. The language of the author is lucid and has played a role in making the narration compelling. Further, it makes it easy for the reader to imagine themselves becoming a part of Dacia’s story. Mandi did an admirable job keeping the readers hooked. I loved how she grappled with and depicted the emotional turmoil Dacia had been facing. I could practically feel it in my bones.

The characters, as usual, were penned to perfection. This book mainly focused on Dacia and her relationship with the Dragons. Oh, also with Mavros. Do you remember the initially despicable demon who now possibly (surely) owns my heart? Yeah, him! I liked that Cody and Dacia’s relationship had a second-row seat in this book. All the previous books already established a potent connection between Cody and Dacia. Emphasizing it over and over again would’ve been pretty redundant and taken the swoon out of their (very) limited interactions in this book.

The ending has me shook. It was a bit of a cliffhanger, so naturally, it made me almost cry out for the next book. But hey! I adored the ending. It was surprising yet inevitable. So, yeah. I can’t wait for the sixth book that comes out on March 31, 2021. Yes, ladies and gentlemen, mark the date on your calendars! Now, excuse me while I count down seconds until the release of the sixth book, by the very talented author – Mandi Oyster. Dacia Wolf & The Wings of Change.

Purchase her book via Amazon: https://www.amazon.com/Dacia-Darkness-Within-Mandi-Oyster/dp/1733290494