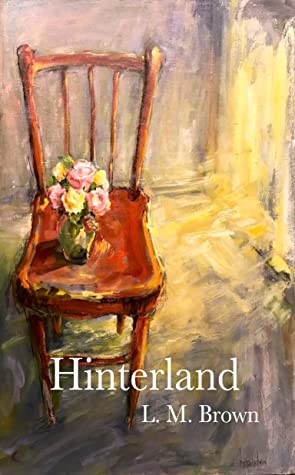 Nicholas Giovanni is a caring husband and father. With his wife, Kathleen, being a paranoid schizophrenic, Nicholas’ entire life revolves around his 5-year-old daughter Kate who is too young to understand what is going on around her. When his childhood best friend Ina returns home, suspicions arise and actions are taken.

After a terrifying incident, Katheleen is admitted to a Psych ward and poor Kate has no idea what happened. Since Nicholas has a history of violence, he has to bear the brunt of people’s suspicions that he had something to do with Kathleen’s psychotic breakdown. When Kate starts to dig around for the truth about that eventful night, all attempts of Nicholas to keep her safe from the horrifying truth, goes down the drain.

Hinterlnad is an emotional tale of dysfunctional family tainted by the shadow of a hereditary Mental illness. It is an amazing Mystery/Thriller which is bound to keep the reader bouncing on the edge of their seat in anticipation. The book is really deep and talks about familial love and mental illness in a brutal light.

The cover of the book is deep and signifies a broken family. The title is also really unique and is a very appropriate one for this book.

A steady pace was maintained throughout the course of the book save for the last 50-70 pages where the plot becomes really fast. The plot was riveting and filled with suspense. The writing style of the author was compelling. The story line was really unique and the bo0k was jam-packed with emotions.

The characters were real and very descriptively penned. Every character had their flaws which made them real. The time skips throughout the course of the book and that time gap is also cleverly penned. The character of Kate in particular was really well penned. When she was 5 years old, she was an innocent child missing her mother and when she grew up and reached her teenager, the trauma she underwent in her childhood, paved way for a rebellious ‘brat’ who did what she wanted to.

Being a Psychology major, I can vouch for the accuracy of the psychological technicalities mentioned in the book. The book is harsh but depicts the true impact a mentally ill family member can have on the rest of the family. This book bring about awareness about mental illness and at the same time, weaves a really compelling tale of familial dysfunction.