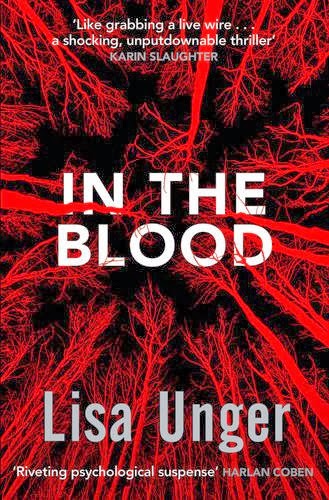 “No, I was not afraid of the dead. It was the living that filled me with fear and anxiety.”

Lana Granger can easily be classified as a liar. It is in her Blood. She has told a lot of lies and isn’t afraid of it. She lied about who she is and where has she come from. Now, she can’t even remember the truth herself.  Luke is an eleven year old boy who likes to play games. His next target is Lana Granger who just happens to be his new part – time care taker. Conspiring a web of secrets, there is someone hiding behind the shadows. Someone who knows all about Lana’s lies. Someone who is dying to unravel Lana’s secrets.

In The Blood is a very compelling Psychological Thriller. I am very proud to state that I gobbled up the entire book in 8 hours flat. The book was so fascinating that the mere thought of putting it down, even for a single minute was utterly revolting.

The book never really lingered on any particular scene for long and had a quick pace. The scenes rushed past with such grace and ease that once you sit down with the book, you never even come to know when it ended.

Lana, she had a fierce character. She never really took crap from anyone. Yet somehow, she wasn’t exactly antisocial nor the social butterfly. Rather, she was somewhere in between. The only people she interacted well with, were her aunt, her closest friend Beck, and her Psychology Professor whom she considers a good friend. She never really wanted any attention and hence always tried to blend in by verbally agreeing to everyone’s views. “Even silence attracts attention.” True huh?

Well, apart from that, the writing style was flawless. The element of spice in the novel were the diary entries which seemed to pop up every now and then. The book dealt with certain psychological disorders which I cannot name without unraveling the suspense partially. I would rather keep it to myself then.

The book was one of a kind and even quite informative. I really loved the book. Period. The characters seemed real and the madness and horror could be literally felt. It is like you become a part of Lana’s twisted world and to fight against time is the only way to make it out alive. After all,

“You can’t hide who you are… Not forever…”