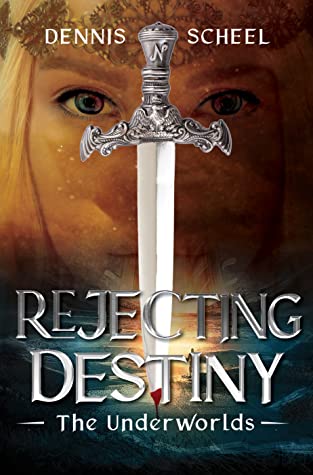 When the Darkness was unleashed on the world, a lot was at stake and a lot of people paid price. Denida & Nina were two such people. Both the parents are coping with their son’s death differently. Nina is lashing out at everyone and everything while Denida is all set to make things right. For this, he has made a deal with Lucifer, the Devil himself. And we all know, that it never suffices well to make deals with the Devil.

Rejecting Destiny is the third book in The Underworlds series. It is a Science Fiction novel merged with elements of Fantasy and Dark Magic which makes the book really unique.

The cover of the book is beautiful & the title sums up the events of the book in a poetic way. In the course of the book, both, Denida & Nina seek to cope with their sons loss and wish that somehow he could come back.

The book commences with a very distraught Denida who blames himself for his son’s tragic death. Nina, his wife, blames him too. Soon enough, the book delves into flashbacks which detail the inception of the world as we know it. Those fantasy flashbacks were truly amazing as they provided some insight and also gave a new perspective to the reader.

Since the very beginning, the book managed to seize my attention. The language was fluid, comprehensive & enthralling. The writing seemed so real that I could practically imagine myself IN the novel. Since the moment I started reading, I knew I was going to be in too deep and I was! Even the thought of putting the book down was tortuous for me.

The emotions that the author brought out by his writing were so real that even in the very beginning, when Denida and Nina were lamenting the loss of their sons I couldn’t help but shed a tear or two. This was the power of the author’s words.

The characters seemed real and well crafted. The action sequences were really well penned. Despite the constant change of the setting of the story, the author managed to somehow keep the flow of the story intact, which is commendable. The book was a whirlwind of emotions and the climax was beyond words!

Over and all, this is a book for all the Sci-fi and Fantasy fans out there. I consider it a must read because this book does not only thread an excruciatingly beautiful story, but also because it is unique and one of a kind.