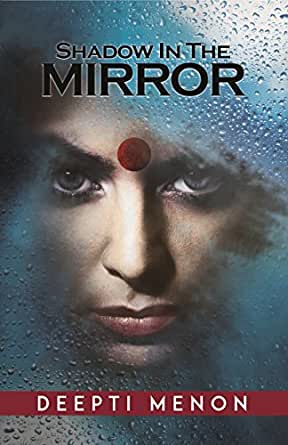 (I received a review copy of this book via the Blogchatter Review Program in exchange for an honest review.)

Shadow In The Mirror is an intricately penned Psychological Thriller by Deepti Menon, published by Readomania. The book begins with a pregnant lady falling to her death from a balcony. In order to unravel her story and get her justice, Vinny, a journalist, approaches Nita’s father. Nita’s death has cast a shadow on a lot of people. What comes next is a series of stories that are untangled and somehow relate to the case at hand. From Intimate Diary entries to letters and warnings, this book has it all.

First things first, the title of the book is, simply put, amazing! It holds immense significance and eloquently captures the essence of the story. The cover is also hauntingly beautiful and eye-catching. The blue hues and the terrifying face on the cover is what made me pick up this book in the first place.

The story begins with a bang. From the very beginning, the author introduces the readers to the plot and from there, the story starts developing. The book is fast paced and lucidly penned. It is easy for the reader to imagine themselves in the story and watch it unfold right in front of their eyes. The narrative is layered. Despite being penned from a third person point of view, Deepti Menon skillfully captures the mindset of the people whose stories she is narrating.

The book is not an easy read since it fosters a lot of subplots. The reader needs to be very attentive and needs to keep a proper track of all the characters, since there are so many of them. However, the delving of this book into the subplots is also one of its major drawbacks. I felt as if too much emphasis was being placed on the past as compared to the present. The entire book, save for the last 20 pages, took place in the past, before Nita’s suicide.

Further, there was too much detailed description of all the characters, some of which I found to be irrelevant to the actual story. After a while, it became tedious and mundane. Even during the climax, the reader is left grappling with some loose ends. I felt that the climax was too abrupt and rushed. The plot had immense potential but it didn’t come off as good as it could’ve and should’ve been. In fact, the main plot of the book was glaringly predictable and there was just one particular twist which I almost did not see coming.

Well, apart from that, the writing style was engaging. The ways the author has delved into the psychological aspects of humans is commendable. The element of spice in the novel were the diary entries which seemed to pop up every now and then. Despite being a little let down by this work of the author, I am sure I would read more of her books.

I would recommend this book to anyone who is a novice, trying to venture into the arena of Psychological thrillers. This book can be a good start for them.

Purchase her book via Amazon: https://www.amazon.in/Shadow-Mirror-Thrilling-Quest-Redemption/dp/9385854143