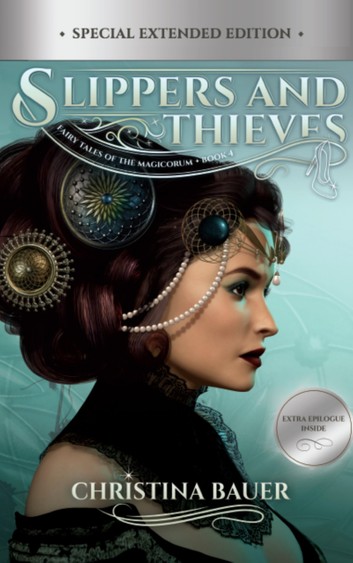 Slippers & Thieves is a fresh retelling of the classic Cinderella fairy tale. The novel outlines the story of Elle who is the warden of Fae magic & Alec, who is the warden of wizards & enchanters. Both of them fell in love, but as one says, everyone loves to hate a happy pair of lovebirds. That is what happened to Elle & Alec. Alec’s parents along with Elle’s steps conspire to tear them apart. Will they succeed? Well, that’s what this book tells you.

I have to admit, when I first picked the book, I was expecting it to be like all other Cinderella retelling. The female lead would be moping around & the male lead would be living a life of misery. But I am so glad I was wrong. I won’t go itnto much details but this book was a fresh (and much needed) aberration from the cliché retelling. The novel begins 3 years into the past where the story actually began & then we come across the present times. Also, the novel introduced so many different characters like weres, fairies, elves & vampires. You name it, this book got it.

I really liked how the author brought about a tinge of Fantasy & presented a mixture of some classic fairy tales like Alice in Wonderland, Snow white & of course, Cinderella. The language was comprehensive & graphic. The book had me biting my nails in anticipation of what would happen next. The book instigated in me, a plethora of emotions and I could feel myself INSIDE the novel.

The story line had a lull since the very beginning & it drew me in like a mother drawn to a flame. The characters were phenomenal. They seemed real. Elle was head strong & she knew what she wanted. Alec was also not the one to be pushed around. Even the supporting characters were so well penned.

I would recommend this book to all the people who wish to read something out of the box.