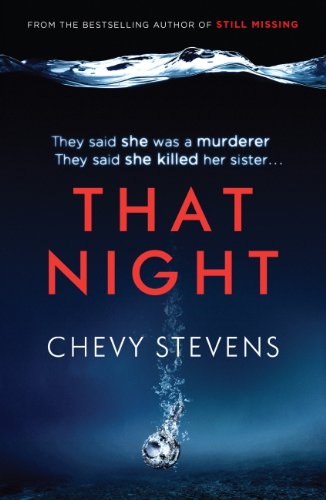 Toni – an 18 year old delinquent – and her boyfriend Ryan were convicted with Toni’s sister, Nicole’s murder. Due to lack of evidence, Toni and Ryan have to spend 17 years in prison. After 17 years, Ryan and Toni are out on parole. Ryan feels that he can decipher the secret of Nicole’s death. But he doesn’t know what he has gotten himself into. On the other hand, Toni’s family is torn apart since her mother doesn’t believe her to be innocent.

With menacing figures appearing from their past, Toni and Ryan have to fight against all odds to uncover the secret behind Nicole’s death. And sometimes, before moving forward, you have no other option but to take a step in your past.

That Night was the first Thriller book which I read. The narration of the book was very fascinating and at the same time, very easy to understand. The story oscillates between different time spheres in Toni’s life.

The intricately detailed personal life of Toni is what makes the book immensely realistic. A broken family, a young delinquent daughter who seems to be untameable and a tangled web of secrets, all seem to create a cliché story plot. Yet, this particular book was anything but a cliché.

Honestly speaking, this book deals with almost every issue faced by an average teenager. However, not every teenager is convicted of murder, but oh well! We start from rebelling and move on to bullying, relationships, verbal abuse, betrayals, strained family relations and what not.

Above them all, the book explains in detail, the growing gap between a teenager and their parents, which is indeed a very big issue in the present day society. The constant struggle of Toni to forget her past, make up with her parents, and ensure justice for her sister adds spice in the already hot and crisp story.

The suspense from the very beginning was enough to drive me over the edge. My heart continuously pounded thinking of the numerous possibilities and plot twists which could be there in the book. However, both, fortunately and unfortunately, the book was unpredictable. Fortunately, because it prevented the book from becoming boring. Unfortunately, because the twists and turns were excruciatingly beautiful yet utterly frustrating.

Looking for a decent thriller which will keep you bouncing on the edge of your seat? You are more than welcome to read That Night by Chevy Stevens where you will come to know that –

Behind The Blinds – Urvi Momaya