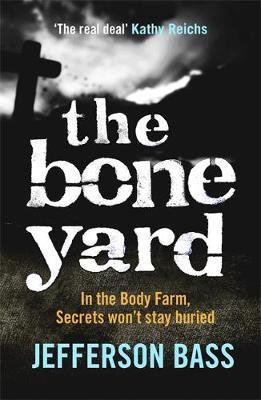 “Everything is an evidence of something… This whole world is a big crime scene.”

It was supposed to be a simple job. All Dr. Bill Brockton had to do was fly out to Florida to help and old friend on a particular case. Angie believes her sister was murdered and did not commit suicide. The facts which they gather, speak for themselves. However, there is a bigger and more horrific case waiting for Angie and Dr. Brockton. What happens when they come across a Bone Yard?

When Brockton finds bones buried in the grounds of a one – time reform school for boys, it becomes crystal clear that the town is not as happy as it seems to be. This sunshine town of Florida has had a dark past with deep secrets. And, to top it all off, someone very powerful is lurking in the shadows, who will stop at nothing to keep the secrets buried deep inside.

Penned by Jeffersson Bass, The Bone Yard was a fantastic forensic thriller. The compelling story plot was enough to drive the reader to the edge. It contains scientific details and forensics to a great extent. The case which has been cleverly set up, is full of humour, humanity and even some gory details.

This book was a fast paced, immensely detailed forensic thriller. However, I would like to point out that the book didn’t really interest me since the very beginning. For a certain amount of time, I just had to force myself to go on. But then, the suspense starts building up and we find ourselves tangled in a web of secrets and lies. Also, due to the very intricate details, the book might prove to be a little confusing at first. But then, soon, you start growing accustomed to it.

The novel had me on the verge of tears numerous times. The sheer brutality faced by the boys in the reform school was horrifying to say the least. If the details of the reform school does not irk the reader, then, I must be forced to conclude that s/he is a very cold hearted person who does not possess a heart.

The gory particulars of the bones, the skeletons and the ‘apparently’ distant past are petrifying. There will be numerous times when you will feel that you just can’t go on any longer. But, the hot and building suspense will keep you going no matter what.

There are instances in the novel which are too painful that you cannot even imagine it happening to someone else. But alas! You know what makes matters even worse? The case in the book – the reform school – is inspired from real life incidents.

The characters of the book seem real and are lovable. They take us along with them because we learn things in the same way and at the same time they do.

Nothing I say will do justice to a book this good. Despite having a few flaws, the overall book was insane! I recommend everyone out there to read this book. If not anything, it might just change your views regarding certain things like reform school and delinquency.