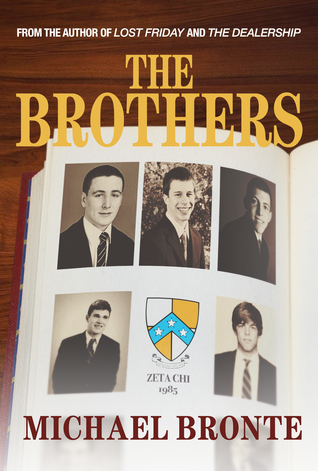 The Brothers is another one in the list of wonderfully penned thrillers by Michael Bronte. This novel focuses on the brothers of Zeta Chi fraternity house & John Adams College, class of ’84. On their 30th class reunion, one of their own turns up dead and so, all the brothers take it upon themselves to find the one responsible.

Michael Bronte brings about an engaging and thrilling novel with an exceptionally well appointed world. I have got to admit, one of the major reasons I picked up this book was due to the Fraternity plot. I have always been interested in reading about Fraternities since it is a relatively new concept for me. Story wise, I must commend Michael for bringing about something new yet relatable for the readers. The plot is interesting and keeps the readers hooked. One can’t help but turn page after page and gobble the entire novel.

The book, like all the others by the author, is penned to perfection. The language of the author is lucid which makes the narration compelling. Further, it makes it fairly easy for the reader to imagine themselves being a part of the fraternity brothers’ story. Michael did an admirable job keeping the readers hooked. Every word that he wrote, I could practically feel it in my bones. Personally, I feel that Michael’s books should be made into movies or TV Series. They have the potential for the same.

The characters, as usual, were penned to perfection. Despite fostering a wide array of characters, Michael does justice to all of them. I particularly admired the character of Harry. I found him to be really endearing. His persistence and endurance is what made him my favourite character. Despite being shrugged off by his fellow brothers more than once, he was still pretty persevering.

The ending had me wishing that there was another book tracing the adventures of the fraternity brothers. The thrill and the constant high tension narrative makes this book a memorable ride. I would recommend this book to all the thriller lovers.