The Girl in the Red Lipstick is a thrilling work of fiction penned by the talented Ajak K. Pandey. Dexterously woven and somewhat addictive, this book sets an entirely different standard for fiction books. A guy sympathizes with a prostitute and takes it upon himself to help her. The basic foundation of the story is not so unique but, it still manages to keep the readers engaged.

The simple narration and the vivid imagery make this book stand out in the sea of other similar fiction genre books. The fact that the book plot was something I didn’t really see coming deserves some brownie points. The characters of Arun and Kajal were nothing extraordinaire. They held semblance to reality and didn’t really do something out of the box.

However, I did feel that the character of Lalitha was underdeveloped. I would’ve liked to see her address more of her problems in a humanistic way – delicately and like something that troubles her. On the contrary, they were often just stated for the heck of being put out there. Almost like it’s something that isn’t supposed to bother her.

I expected more drama to ensue when Kajal entered the scene but, no such thing happened. I am still not sure how I feel about it. Whether I liked it or whether it was a little uncharacteristic. I did like the climax and how the story built up to reach it. But, I still feel that as far as potential goes, Ajay Pandey has a lot, and, somehow, this book didn’t reflect that potential as well as I had expected.

Overall, it was a decent read but not too extraordinary. However, if you are looking for a quick fictional read, this book should be your go-to. 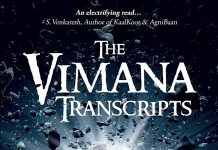