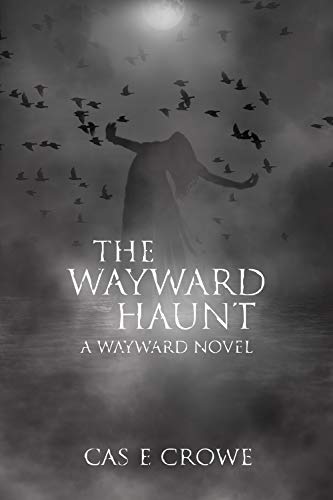 “For there is truly no greater or powerful emotion than hope. It brings optimism, faith, aspiration.”

With October right around the corner, you might wanna stack up your spooky and horror reads for the month. When you do, make sure to add this amazing debut novel in your TBR lists.

The Wayward Haunt is a well penned Fantasy & Horror novel with just the right amount of spook to give you the heebie-jeebies. It outlines the story of a teenage girl Zaya, in a war infested dystopian world, struggling with the demons of her past. Enter the good looking Captain Jad, who makes it pretty hard for Zaya to ignore her feelings. You know what they say? Sometimes one’s feelings, can be their undoing.

I admit, the basic plot of the book might ring a little familiar with the Shannara Chronicles fans. But, the story line of this book was a fresh aberration from the otherwise mundane and redundant stories of dystopian societies where human are depicted as the lesser privileged species. Since the very beginning, I was drawn to this story as a spider being beckoned to an unwitting fly.

The myriad twists and turns in the novel were utterly unpredictable. Anytime I tried to get ahead of myself and make a prediction, the author’s words proved me wrong. The world building was commendable. There were enough details to make the world in the story seem real & not more. The way the author threads the entire story is applauding! The secrets unravel layer by layer. The reader is not rushed into anything. The story takes it’s time, building and coming to life right in front of the reader’s eyes.

During the climax of the story, I felt as if someone had wedged a knife in my heart! It was so heart wrenching! I had tears streaming down my face for a solid 15 minutes.

The characters were vivid and seemed real enough. Zaya was a recalcitrant, but with a past like hers, it’s understandable. Though the character of Jad was shown relatively less, he still had a very vivid personality. The supporting characters were also articulately penned.

One of the best parts about this book was that the Romance between Zaya & Jad gradually built. There was just a subtle & implied essence of Romance & that was nice because it prevented the novel being deterred from it’s focus.

In a nutshell, this book is a must read for all the people who love Fantasy and a tinge of Horror! I, for one, can’t wait for the second part of the series so that I can immerse myself into the world of Zaya again. On that note, trust me when I say this guys, your October is incomplete without this amazing read.