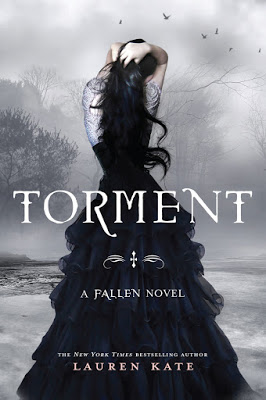 “Sometimes beautiful things come into our lives out of nowhere. We can’t always understand them, but we have to trust in them.”

This is what happens in the second book of the Fallen series. The aftermath of what all happened in Sword and Cross, Luce is hidden by her damned angelic boyfriend, Daniel, in a school in Shoreline which is full of Nephilims. There are still people who want Luce dead. But why? Is it just because she is in love with Daniel? Or they have an even bigger intention…?

I picked up this book just 2 days after I finished reading Fallen. The questions which arose during Fallen kept revolving around my head and triggering my brain begging for answers. Again it was a book which took me a day to read since the mystery and the thrill in the book kept me imprisoned within itself…

Also, this book made me furious many, many times! It just kicked the hell out of me and was compelling me at times to toss the book from the window of my room… just I didn’t throw it out! It was so infuriating when Luce used to do everything that she was asked NOT to do! How can someone be so damn reckless!? She put all the angel’s existence and her life at stake.

On the other hand, there was Daniel… he loved Luce and trusted her from all his heart. But Luce… she simply had almost no faith in Daniel… how could she make him suffer so badly? Doesn’t she know that he loves her so much? “I have to go,” he said, at last, getting to his feet. “I shouldn’t even be here, but I cannot keep myself away from you. I worry about you in every waking moment. I love you, Luce. So much it hurts.” See!

Though it was a bit annoying on Luce’s part, it somewhere triggered the most important aspects of the novel like Luce being able to decipher a few moments of her former life with Daniel. Without this, the further books in the series would have been a waste…

The book is about how Daniel and Luce quarrel over trifle things, how much frustrating it is for Luce to be kept in dark despite Daniel knowing everything about their former lives, and how even after being apart, they are together… The book reveals the answers to a few questions which we must have had somewhere in the back of our mind but at the same time, also generates a few new ones for us to ponder upon!

People who are sensitive cannot read this book in one sitting… it is extremely sentimental and is certain to leave a deep mark on the reader’s heart! If Luce & Daniel have to be together for eternity, she has to decipher every single detail of her past! But what if she couldn’t…?

“Tonight there was only time to wave goodbye, take a deep breath, and leap into the dismal shadow.

OH NO!! What is Daniel gonna do now?

The climax will leave you absolutely spellbound and paralyzed… you will be damn desperate to find out that what happened to Luce in the next book of the series…“Passion” where “Love is the only thing worth fighting for.”

“Would he find her?

Would he save her?